The Intention of Developmental Randomness is to Distance and or remove the preconceptions and assumptions from designers. To provoke work that is less a dependence on the fundamentals, calculated and precise design and more accidental brilliance during the ideation and further phases of the industrial design process. Developmental randomness is a tactic that would most dominantly be present in the initial ideation and concept development stages of the industrial design processes. The randomness and unpredictable part of the tactic is aimed to come from forces, objects and concepts that are chaotic and spontaneous in nature.

The key backbone to the concept of developmental randomness Is the branch of mathematics known as chaos theory. Chaos theory is the area of mathematics which deals with complex systems whose behaviour who is highly sensitive to slight changes in conditions, so that small alterations can result in strikingly greater consequences. In Developmental randomness you use these chaotic systems and indescribable natures to your advantage as the utilization of chaotic systems helps to potentially spark inspiration. An example of this could be through the use of a coffee stains as a silhouette for your product drawing, as there is no way of knowing what the coffee stain will turn out like when you first spill the coffee. This use of an external random item allows for a designer to stretch beyond the fundamentals and assumptions that they make when they design and instead be challenged to create a product around a potentially unfamiliar shape or object.

Throughout your career as a design you learn many tricks of the trade ranging from the fundamental basics all the way through to a more detailed understanding. These tricks make you a better designer overall, however they also bring along a series of assumptions which you could as a design consider during your ideation and development stages. These assumptions may leave your proposed ideas and concepts potentially limited and isolated. As a designer you may stop yourself from thinking of ideas which you may deem to be outlandish or hard to draw because its not made up of simple shapes and in turn stopping your idea from being what you originally anticipated. It could be that you have an amazing idea with sharp curves and thin walls, but the idea never makes its way to paper as your knowledge of manufacturing may persuade you to do otherwise. Developmental Randomness looks to remedy these preconceptions by forcing you into a shape that you must work off while in turn also giving the designer a reason to get more outlandish ideas down on paper.

There is are a plethora of different methods of utilizing Developmental Randomness throughout your developmental process. The large majority of them can fit into one of these categories’

Liquid: This method involves using the almost unpredictable nature of a liquid to create a randomly shaped stain which you will then use take make up a part of your design.

Environment: This method requires you to look out into the world around you and pick out a detail to transition into your work. Focusing less on the static objects in your surroundings and more on the items that may move and be subject to a random relationship to one another i.e. Leaves on the ground, a flock of birds on the street or a piece of rubbish on the ground.

Object: For this method you are required to have create your own randomness from the items around you. Maybe you have a box of paper clips that you can grab a hand full of, throw on your table like dice and then play connect the dots from where they land to form your shape. Another example could be that you grab a piece of paper and tear up in multiple different directions to form several unpredictable shapes to work from.

The main goal of the Developmental Randomness process is to help push the design beyond the restraints we as designer’s place on our work through assumptions and preconceptions. To challenge the designers original work ethic to potentially result in accidentally brilliance or a small idea which can inspire a strikingly larger result in the future. Respecting and bending the randomness of chaotic systems to allow for the break away from assumption to allow for order to breed from unpredictability. 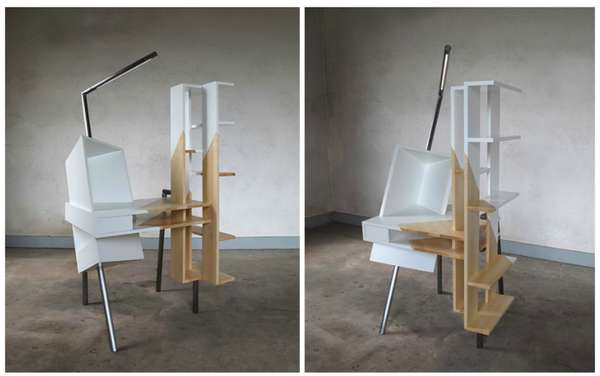 Itay Ohaly is an industrial and product designer from Israel whose work focuses on processes and chaos. He deliberately brings disorder into his working process and actively encourages it. Because he likes to work through non-linear processes, one project may have many possible manifestations. After all, an exploded creative process does not lead necessarily to that one table or one chair. His working method compares in a sense to the Cadavre Exquis drawings of the Surrealists where multiple hands worked on one drawing.

The human brain (maybe all animal brains) are wired to see faces, and we often see them where they don’t exist. Put two circles and a line near each other and we’ll make it a face. That’s why most of us see a face when we look at cars, trains, phones, and these two pieces of punctuation : ). For a few, this impulse is hyperactive, and faces appear where most of us see just, say, a bit of spilled coffee.

Many artists have used coffee or tea as a medium, most often using concentrates as paint or stains, but none has produced something as distinctive and charming as Stefan Kuhnigk, an artist from Hamburg, Germany. His Coffee Monsters project began in 2011 when he saw a coffee stain on a paper at his office. With a pen, he created a creature with a few strokes of ink. The goofy, rolly, squiggly thing captured Kuhnigk’s fancy. The first monster went on Instagram. More than 500 followed.

Not only are the drawings irresistibly delightful, they are a premier representation of café art: compelling, highly skilled, informal, and complementary to coffee. Outside of the type of coffeehouse that has over-sterilized corporate branding, it’s hard to imagine a shop Kuhnigk’s drawings wouldn’t fit perfectly.

The best 100 monsters are now collected in the Coffeemonsters Book, and it would certainly be a wonderful addition to any café’s coffee table. Published in Europe by Gudberg Nerger, the book is available on Kuhnigk’s website, thecoffeemonsters.com.