‘Uninformedism’ is a term which represents a lot of what we see around us today. It is the disconnect between the consumer and the consequences of their choices, their ‘impact’. This often leads to ‘mindless consumption’ as there is a total lack of knowledge as to these negative impacts, most commonly on others lives and the fragile ecosystems of our planet.

It is simply not true that us as humans just don’t care, its just that there are a small percentage of people who are out to make a lot of money. This powerful ideology of consumerism, which is a social and economic order, encourages the acquisition of goods and services in ever increasing amounts. Similar to the economy which relies on constant and increasing growth.

The industrial revolution and mass production in the 20th century lead to over production. With this extra supply, manufacturers turned to planned obsolescence and advertising to increase consumer spending. And nowadays we see that consumerism expresses the idea not of, ‘one man, one voice’, but of ‘one dollar, one voice’.

In the book, Stuffocation by James Wallman it points out in countless ways how ‘experiantilism’ is far better for you and the planet than ‘materialism’. A simple way to put it is that a bad experience will almost always become a funny memory if not a great story, whereas a bad material purchase will constantly remind you of how poorly you spent X amount of dollars, until you finally get rid of it.

Largely it is misleading advertising and unethical company at the forefront of this problem. However us as consumers need to become conscious in the act. To think of it as every purchase you make is a ‘moral act’ and an opportunity to ‘vote with your dollar’ for the world you want to see.

This tactic has many different values for me, however mainly I think it is a shift in societies current ideologies, which will be to ‘reframe’. I’m very interested to see what will happen over my lifetime in regards to this particular matter, and I hope we see some positive change.

Read the article: What Is Minimalism?

Project 333 is a minimalist fashion challenge that invites you to dress with 33 items or less for 3 months. It has inspired thousands to get onboard and share their experience. It is for men and women of any age and most importantly it is a challenge not of suffering but of joy! 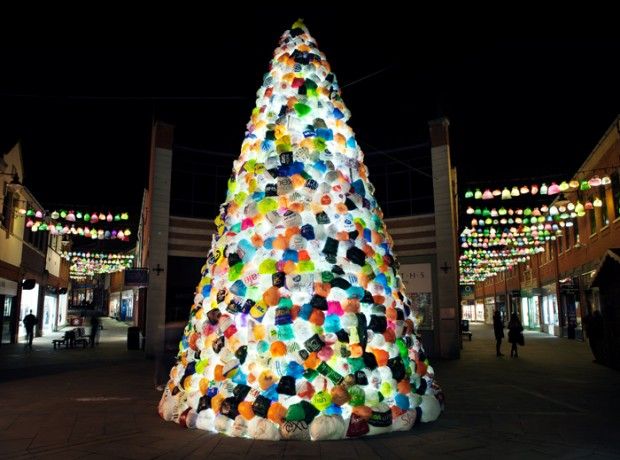 This stunning 7 metre christmas tree is made out of 2000 plastic bags. The tree was designed by the anonymous Madrid-based arts group Luzinterruptus, and was built with the help of the local community. This sculpture is an excellent project which symbolises the over-consumption which is increasingly replacing the traditional meanings during the holiday season.

This Handbag designed by Leanne Fishcler could save shopaholics a lot of money. It has a sensor installed which can detect when a credit card is removed. It then tells you off in a Cockney accent from a concealed sound system. With phrases such as, “You’re already in your overdraft”, and “Do you really need this?” It gets progressively louder until the credit card is put back in the bag.